Details
by George Roth
on 01 May 2015
in Localisation

When Tristana's rework came out in early 2015, she got a complete retake of her voices. She got a more mature, but still playful and cheeky voice, and instead of 32 different lines she scored a shiny new script of 285 audio lines too. When localising her, the dance lines were definitely the most problematic part in her new kit: she is singing US Army marching songs with lyrics fitting Bandle City, her hometown. Well, good luck making that culturally relevant in another country – unless you have an awesome community of players to help you out! 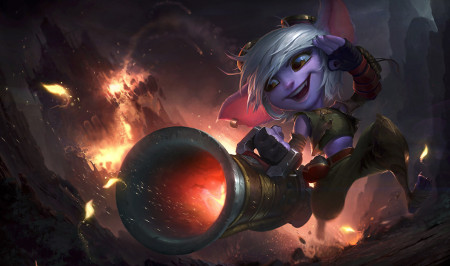 Tristana changed quite a lot with her rework. Apart from her gameplay changes, her lore and personality changed too: we waved goodbye to her as a Megling and she officially became a Yordle, while she turned a bit more mature and cheeky in nature. Her voiceovers reflected this change as well as her sound transformed from a child to a teen while definitely picking up a more cheeky and ballsy tone. This meant that her English voice actress changed, and Trist ended up being voiced by none other than the Girl Who Can Do The Voice Of All Our Champs, namely Elspeth! In our case, the Hungarian Tristana was originally voiced by Kata Gáspár, a famous and super cool actress in her twenties, so although the voice of the character changed considerably, we never needed to look for a new voice actress for her. Kata pulled off Tristana's original childlike voice really well, so the more grown up voice couldn't pose a problem for her – and indeed, she did great.

What did pose a problem for us though, was the translation of Tristana's dance lines. While dancing, Trist is singing a tune inspired by the US Army Cadence songs, referring to the Bandle Gunners, a very serious and cruel military organization from her town, Bandle City. Here come the lyrics:

Localising this in a proper way was always going to be a pretty challenging task, mostly because the whole idea of militarization and these marching songs is a lot less relevant in Hungary than in the US. To come up with something that fits the country a bit more, I looked at original Hungarian children's songs to modifiy them in order to match Tristana's character. After a couple of days of on-and-off thinking in the shower, I remembered a game from kindergarten that we used to play which was accompanied by a song. I changed the words in the tune to rockets in a way that fit the number and length of the syllables nicely, put it into the Hungarian script, recorded it with Kata, and uploaded it into the Hungarian version of the game when Tristana got released. The song was okay, but I was aware that it wasn't one of the best ideas of humankind ever.

Here is something I want to talk about before moving on. I'm planning to write a series of articles on this in the future, but for now it's important to bring in a little intro of it before moving on. Here it is: for me, the best thing in League of Legends, by far, is our community of passionate and awesome players. They continuously work hard, post on the forums, reach out to us in the game client and talk to me on Skype if they see a bug or have a better idea for any translation. Thanks to our players, the Hungarian client is way better than it could have ever been if it was just up to me and our team of translators and testers. I think there are two important things to consider when localising League of Legends: one, the game is technically setup to always evolve; and two, one person (aka me) or a handful of people won't always have the best ideas for everything. On the other hand we have a huge resource of passionate players available, who are very happy to help in order to make their favourite game better, with a chance that their own ideas might get into the game as well – and I'm very excited and happy to act as a bridge to work together with them on this. This way, the translation becomes better and better, while our players in Hungary truly become a part of the experience and own a part of the game too. If you speak Hungarian and have a better idea for any translation or see a language related bug in League of Legends, please post on our forums or hit me up on Skype any time!

Hitting me up on Skype is exactly what one of our players, Gabor3 did. He reached out to me regarding Tristana's Hungarian dance, saying that in his humble opinion it wasn't good enough. After it turned out that he didn't have a better idea himself either at hand, we talked about the needs and the vision behind a theoretical good translation, namely that it needs to be culturally relevant, it has to fit the English lines by length, and it also has to fit Tristana's character, while we should also change a couple of words to reference the Bandle Gunners if possible. We agreed that he would make a forum post about the song, onto which I would then comment, explaining why I'd gone with what I went, establishing the vision and requirements behind an ideal piece, and inviting all players to ideate together.

After the forum post was created, we ended up having a very nice and open discussion about the vision behind a potential Hungarian translation of the song, while more and more players submitted their ideas. And finally the breakthrough happened: a couple of players figured that although the whole military marching idea is not really popular in the country at the moment, it was indeed very popular a couple of centuries ago! We were even taught a lot of these folk-marching songs at primary school, so all we needed to do was rewriting those with a couple of motives that referenced the Bandle Gunners. At the end of the day we had an insane number of submissions, but two ideas clearly stood out, submitted by Gabor3 and another player called Womath55. Luckily those two guys got the most upvotes from the other players as well, so there was no need to discuss there – I ended up including both submissions in the dance lines, because both of them truly deserved to be there. A big shoutout to both of the guys!

All there was left to do was refining both songs a tiny bit to match the number and length of the syllables of the original songs, then I went into one of our studio rooms at Riot and recorded myself singing them to make sure Kata can sing them in the exact same fashion. Yes, everybody was making fun of me at the Hungarian studio afterwards for a while, but it was worth it! Moreover, since Omega Squad Teemo was coming out in a couple of months and Kata was lending her voice to Teemo as well, we didn't even need to drag her into the studio just for the four short lines of Tristana, but she could do them along with the full Omega Squad Teemo session. As Hannibal would say: I love it when a plan comes together!

A player happy with the change on our forums

I'd like to say a huge thanks to Gabor3 and everyone who helped us ideating on the new dance lines of Tristana on our forums: this story is a clear example of how we can make the Hungarian localisation of League of Legends better by working together, as at the end of the day all of this is for you guys, for us, for the players. We have a game on our hands that is set up to constantly evolve, so if you speak Hungarian, keep being awesome and post on our forums or bug me on Skype in case you have a good idea or see a bad translation anywhere!

The newest champion in League has arrived – and in the Hungarian version we worked with singer Sena Dagadu to bring her voice to life.
Read more... 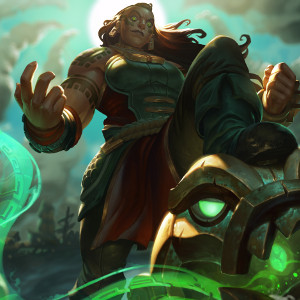 Currently the best free to play football management game out there in my opinion. Although it's played in a browser, the game has a real match engine running the games: you can watch your games live in 3D, something no other games of the same calibre can offer. The game is pretty deep with a lot of options in tactics, training, facilities, coaches, sales, a youth system, national teams, and so on. You won't be playing this game 10 hours a day, but you definitely need to put a lot of thinking and a long term vision into it if you'd like to succeed against other flesh and blood managers. This game was my first step in the gaming industry between 2009-2011, while we brought it to Hungary with some pretty nice success.