After five and a half years I am no longer working at Riot Games. I would like to give a bit of extra context to those who are interested in what's happening.


We released the Hungarian and Czech versions of League of Legends in 2014.

I started working at Riot five and a half years ago; I came here to make my favourite game, League of Legends happen in Hungarian. Back then the gaming industry wasn't as developed as it is nowadays, neither globally, nor in Eastern Europe. That's why I thought it's a huge opportunity that Riot has the courage to launch the game there, and I will be forever grateful to them for it.

Today League is the most popular PC game in the world, and we've become the #1 in Eastern Europe as well. This has happened because of the work of a ton of amazing people: admins, translators, actors, organizers, streamers, cosplayers, and the list goes on and on. You guys are all legends and I'm really happy to know all of you.

And what's next for me? Apart from finishing the Hungarian National Elite League, I definitely want to spend more time doing music. Although in the last couple of months (years?) this has pretty much faded into the background, this is my biggest dream and I want to take a stab at it. Next year we will be 10 years old with my band Just Another, so an EP and a couple of shows can surely be expected. In the meantime in the last few years I slowly started putting together the foundation and vision for another music project, of which I will be giving you more updates in the not too distant future.

Thanks everyone for putting any effort into the Eastern European community of League of Legends, either with your hard work, some good feedback, or simply by not being an ass in the game. I will take a couple of days off to rest, but I won't totally disappear: from now on I will be looking forward to seeing who the new champion is along with you guys!

How we built a site that tracks Facebook likes real time two hours before the League of Legends Launch Event kicked off in Rome.
Read more... 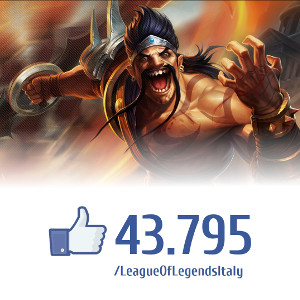 Riot Games started off as a small, indie publisher and developer in 2006. They grabbed the free to play, games as a service model popular in the East and paired it with the AAA production quality of the West. This has been extremely successful: the company is breaking records everywhere while you can see a lot of others trying to emulate its recipe for success. If there is one particular area where Riot is way ahead of the competition though, it's the focus on its players. Most Rioters, while super professional, are extremely humble, approachable, and truly, 110% player focused. You can see this paying off time and time again, with League becoming the most played, watched and streamed PC game ever. I feel super fortunate to have been a part of this exceptional studio and group of people from 2012 to 2017.